The Bayeux Tapestry is heading back to the land where it was made nearly ten centuries ago – at least, that’s where most historians think it was made. The consensus is that it was made in England, in Kent, probably at Canterbury, though there are dissenting voices which argue for Normandy or the Loire Valley in France.

Why does Kent seem the likely place of manufacture? The embroidery craftsmen and (especially) women of 11th-century England were renowned. The artistic design of the tapestry is very similar to images drawn in 11th-century manuscripts produced for the libraries of the cathedral and the Abbey of Saint Augustine at Canterbury. History is usually written or commemorated by the victor. But in this case, the commemoration of a crushing victory was almost certainly created by the defeated, by Anglo-Saxon artists and embroiderers. 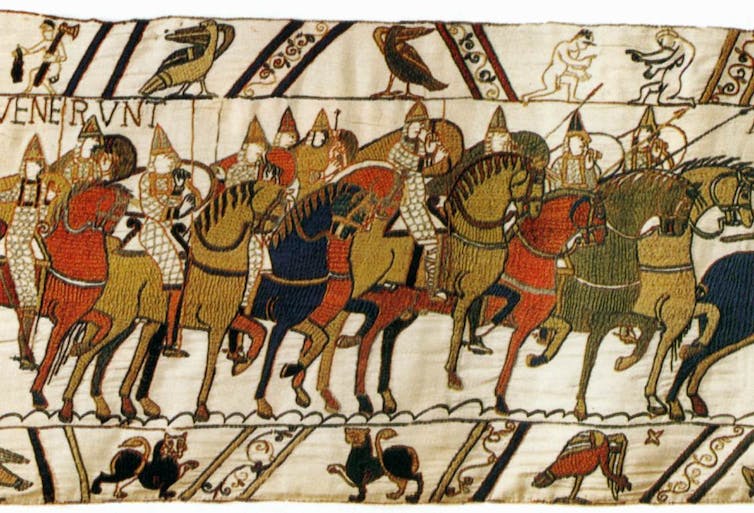 The person most likely to have commissioned the tapestry was one of the victors, Odo, Bishop of Bayeux, a half-brother of William the Conqueror, who was made Earl of Kent after the conquest. Odo plays a conspicuous role in the story of the conquest told in the tapestry, appearing on the battlefield of Hastings mounted on horseback. Churchmen were not supposed to fight and shed blood, but Odo was the sort of bishop who was interested in power rather than theological niceties.

Odo’s cathedral of Bayeux is conspicuous on the tapestry, too. For it is there that Harold swears on holy relics that he will support William of Normandy’s claim to the English throne when King Edward the Confessor dies. This is the moment when Harold is transformed from a brave warrior – a worthy opponent of William – into a perjurer, whose defeat and death, delivered by William, will be the just judgement of God.

Spoils for the winner

Although Odo probably commissioned the tapestry in Kent, it is likely that he intended to display it in his bishopric of Bayeux back in Normandy. That was where the tapestry was found, folded away in a chest and listed in a 15th-century inventory among the rich cloths and vestments held by the cathedral of Bayeux.

It has been in the Norman city, apart from a couple of brief excursions to Paris, ever since. We don’t know how Odo intended it to be displayed. By the late middle ages, it was occasionally hung in the cathedral of Bayeux, but it doesn’t fit there very well. In spite of the importance of the scene of swearing on the Bayeux relics, the tapestry seems more suitable for a secular context, perhaps hung around the walls of the bishop’s great hall, in his palace or his castle.

So many scenes focus on military preparations and the great battle of Hastings itself, and one scene clearly refers to a recent sexual scandal. An unnamed churchman reaches out to touch a woman named Aelfgiva. She appears to cringe, and his gesture seems aggressive rather than tender. In the margin below, a naked man with a huge erection points up towards the couple with meaning.

And it seems designed to be seen at quite close quarters. Perhaps we should imagine Bishop Odo’s minstrels performing in front of it at great feasts, using it as the visual element of an animated retelling of the great story of the conquest to Odo’s guests.

William the Conqueror’s daughter, Adela, Countess of Blois (and the mother of King Stephen of England), seems to have had a similar embroidery depicting the conquest hung around her bedchamber, if an adulatory poem praising Adela is to be believed. So perhaps there were smaller copies of the conquest embroidery. The Bayeux Tapestry itself, at nearly 70 metres, would be far too long to fit in a bedchamber.

Chance of a lifetime

Displaying the tapestry is an issue for modern museum curators. At the moment, the tapestry is displayed in its museum in Bayeux wound around a sort of long drum. One can only see half of the tapestry at a time – and the middle part, on the tight curve of the drum, is probably under some pressure.

Plans to build a new museum to rehouse the tapestry, on the same site, but in a more appropriate case and with new interpretative information, are well under way. The tapestry will have to be removed from its present case – and there will be exciting opportunities for new scientific analysis of this extraordinary object. That would also provide the opportunity to take the tapestry to England.

Its size will surely dictate where it can be displayed here – the British Museum or the British Library are strong possibilities. Both have spacious exhibition galleries and both have items from their permanent collections which would provide a rich context for the tapestry – particularly perhaps the medieval manuscripts, including Canterbury manuscripts, at the British Library.

It is already possible to get an impression of the effect the tapestry must have made if it was hung all around the walls of a great hall of a castle or bishop’s palace. Reading Museum has a late 19th-century copy displayed around the walls of two large interconnecting spaces. There you can appreciate how far the tapestry was intended to be seen as a unity.

As you glance from wall to wall, you can see how powerfully the narrative is told, how different scenes complement each other throughout its length. Get closer to the copy and you realise that this was an object that was designed to be seen at close range. But of course there is nothing quite like the real thing – and the prospect of seeing the Bayeux Tapestry in England is immensely exciting.

This article was originally published on The Conversation. Read the original article.

View all posts by Robert Glencoe